I could sleep in my dress, but these heels are coming off as soon as I get home.– Hayden Panettiere at the Golden Globes 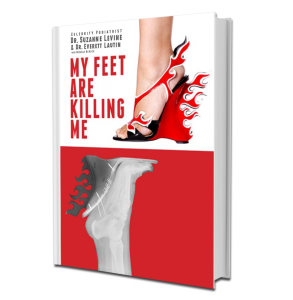 In some ways celebrities are nothing like us. They stroll red carpets as often as we stroll supermarket aisles, and do so wearing fabulous designer dresses that cost more than the average American’s annual salary. They accessorize with borrowed jewels so pricey that they come with their own bodyguards. And, of course, when these A-listers are photographed not a hair or eyelash is out of place. But look at these stars from the ankles down and you’ll actually see that they are a lot like the rest of us. Their flawless pedicures aside, inside their designer stiletto shoes and sandals their feet are killing them.

Celebrity SolesOprah said she spent years wearing the wrong shoe size – a 10- when she was really a size 11. This is an example of how celebrities are just like us! Many, many women do this, too. “We all love shoes, do we not?” Oprah asked the audience when a designer from Jimmy Choo was on her show. In one issue of her magazine, O, she revealed that she actually organized her shoes by how long she could bear to keep them on her feet. She had devised her own “shoe pain-o-meter”! Some shoes she could only wear between the control room and the stage; others that she didn’t even walk in but were “strictly for TV” because they made her legs look longer. She took them off the minute the show was over.

Just imagine what it feels like to be a celebrity. You have to look fabulous and wear designer shoes, but your bunions, hammertoes and corns are screaming at you. (I’ve had patients whose bunions I’ve had to inject before an awards show or fashion runway just so they could walk down the red carpet without wincing in pain.) Often, they have to spend hours in shoes that feel like torture chambers for work and special events. When they’re filming TV shows, starring in movies, or doing a photo shoot, the directors and photographers are in charge of how long they have to film or pose in those uncomfortable shoes. When a movie star is nominated for an award, the whole world is watching her walk the red carpet and, if she wins, she has to teeter up the stairs to the stage and worry about tripping.

Celebrities also get photographed everywhere they go, often at times when the rest of us are thrilled not to be seen. Since many women like how they look in high heels compared to flats (yes, there is a slimming effect), some celebrities feel obligated to wear sky-high stilettos just to run to Starbucks, walk their dogs, or pick their kids up from school. And while celebrities can hire people to fix their hair, makeup, and clothing, they don’t have anyone who can make their corns, bunions, and hammertoes look better. (Well, now they have this book and so do you. But we’ll get to that later.) In fact, Oprah Winfrey, the queen of talk shows, and so much more, apparently used to keep quiet about her bunions until her gnarly bumps were “outed when the paparazzi got a picture of her without shoes on.”

This chapter shows just a few examples of these celebrity soles. With all my years of experience, I feel I can tell a lot about a person from their feet. For each one I’ll “read” their feet and tell you what their foot issues appear to be (because none of them are my patients; healthcare law does not permit me to show or discuss my patient’s problems. The accounts of past patients are discussed with permission.). I’ll also tell you what I’d suggest if any of these stars walked into my office.

In this chapter of My Feet Are Killing Me Dr. Levine discusses:

Buy “My Feet Are Killing Me” Ask Dr. Levine a Question