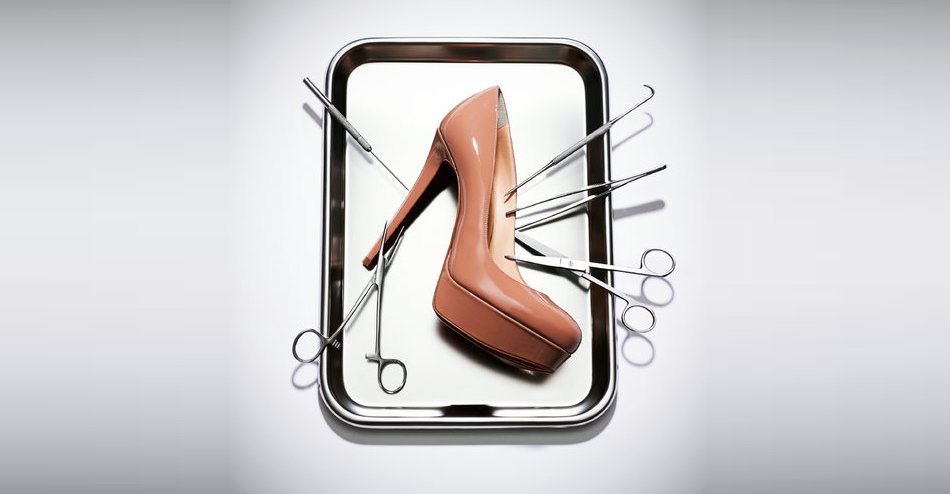 In this article profiling the emerging popularity and exploration of women getting foot surgeries so that they can wear designer shoes the NY Times speaks with My Feet Are Killing Me author, Pillows For Your Feet inventor and Celebrity Podiatrist from New York’s Institute Beauté, Dr. Suzanne Levine. A very interesting read with comments from a variety of podiatrists who speak frankly about various methods, techniques, and procedures they have performed and, at times, invented to help individuals suffering from conditions that range from purely cosmetic, psychological, and work/related reasons. Originally published April 22nd, 2014. Written by Laren Stover.

When Dr. Ali Sadrieh, a podiatrist, started Evo Advanced Foot Surgery in Beverly Hills, Calif., 13 years ago, he thought it seemed a little vain for women to ask for surgery because their feet hurt wearing fashionable shoes.

“Patients would bring in shoes they dreamed of wearing,” he said over tea recently at the St. Regis New York, where he was staying to see New York patients. “On the surface, it looked shallow. But I came to see she needs these shoes to project confidence, they are part of her outside skin. That’s the real world.”

For Dr. Sadrieh (who was wearing made-to-order Gucci brogues), foot surgery is a fusion of medicine and fairy tale. At his practice, you don’t have a bunionectomy; you have a Cinderella procedure.

“I had never met a patient who asked for a hallux valgus correction with osteotomy and screw fixation,” he said. “So I decided to create a name that captures the result of the procedure, without all the Latin. The point of the Cinderella: being able to put a shoe on that didn’t fit comfortably before.”

He also has coined the Perfect 10! (aesthetic toe-shortening — once administered, he said, to a 17-year-old fashion model, so she could wear the shoes her career demanded); Model T (toe-lengthening); and Foot Tuck, a fat-pad augmentation that he said helps with high heels.

And he is not the only doctor changing the face, as it were, of foot surgery.

Dr. Neal Blitz, a podiatrist who specializes in aesthetic and reconstructive procedures (including a Bunionplasty) at his private practice in Manhattan, and operates at Mount Sinai Hospital, calls this body part “the final frontier” for those who have had work done on their faces. “My practice has exploded because of Manolo Blahnik, Christian Louboutin and Nicholas Kirkwood,” he said in a recent phone interview. “There’s nothing like opening a shoe closet that’s been closed to somebody for years.”

Perish all thought of Dr. Scholl’s or Birkenstocks in these waiting rooms. Dr. Oliver Zong, founder of NYC Footcare and self-proclaimed “originator of the foot face-lift and toe tuck,” routinely corrects such conditions as High Heel Foot (a term he coined to describe a deformed foot that’s conformed to the shape of a stiletto), and Hitchhiker’s Toe, (an abnormally large big toe that sticks out like the thumb of a hitchhiker). He recently introduced the phrase “Toebesity,” which he plans to describe on his site, where flashing text promises: “Designer feet for designer shoes.”

One designer, Cathy Hardwick, who gave Tom Ford his first assistant job, had bilateral bunion surgery from Dr. Richard Frankel, the founder of Park 56 Podiatry, in 2008. “He didn’t want to operate, it was so little,” she said of the bump. But, she added: “It was unsightly and it hurt when I wore certain shoes. A few years later he operated. My foot is perfect now. And I can wear sandals I couldn’t wear before.”

Indeed, it’s not unusual for patients to walk into Dr. Suzanne Levine’s Institute Beauté, a podiatry clinic and medical spa on Park Avenue, with a bag full of shoes they can’t wear because of bunions and hammertoes. Victorian boots, Jimmy Choos and Manolo Blahniks are some of the examples on floor-to-ceiling glass shelves. Dr. Levine consults with patients on the designer high heels best suited to their particular feet, knowing, for example that both Prada and Michael Kors make a wider-than-average shoe last. “Some people won’t go to the beach or the pool, they’re so embarrassed about their feet,” said Dr. Levine, who was wearing chunky-heeled Michael Kors bootees during a recent interview.

Her solutions, described in five books such as, “My Feet Are Killing Me,” include, among others, platelet-rich plasma therapy; stem-cell injections; injectable fillers for metatarsal cushioning; Botox; Dysport; Myobloc for excess sweating. She also advocates exercises for the feet.

The craziest request she’s received? “Once a patient came in asking for toe liposuction,” Dr. Levine said incredulously. And Dr. Zong said he had a patient ask to have a pinkie toe removed to fit into her shoes. Neither request was granted.

Dr. Jonathan T. Deland, chief of the foot and ankle service and attending orthopedic surgeon at the Hospital for Special Surgery, is opposed to even less-radical cosmetic procedures.

“The most important thing about a foot is that is doesn’t hurt you and you can function,” he said. “If we’re just talking about three-and-a-half-inch-heel stilettos that cause pain and if they wear a two-and-a-half-inch heel with no pain, then that’s probably not a good reason to do surgery.”

Dr. Deland is cautious about injections designed to pad the feet. “If there was an injection that really worked and that lasted, a lot of good doctors would be using it, because it’s a common problem,” he said. “The answer is, there is not. The patient should ask, ‘Hey, doctor, can you give me the article or the reference that shows long-term follow-up for that procedure?’ ”

But to Annette Healey, an executive vice president in retail services with CBRE, elective bunion surgery felt like a necessity. “Sneakers never worked for my career,” said Ms. Healey. She had elective bunion surgery in 2011 two days after Christmas, “while everyone was away in St. Barts,” she added, so she “could camouflage it better with Uggs.”

Her orthopedic surgeon, Dr. Craig Radnay, told her that her gait had become increasingly affected by her foot issues and that she was hurting her back.

Ms. Healey said she can now walk 20 miles in fashionable boots. “If you live in New York, your feet are your wheels,” she said. Though she spends 95 percent of her time in chic flats or wedges, she also wears Prada, Manolo and Gucci heels. But there are limits. “Sadly, I will never get my foot into a Christian Louboutin,” she said.

Get My Feet Are Killing Me 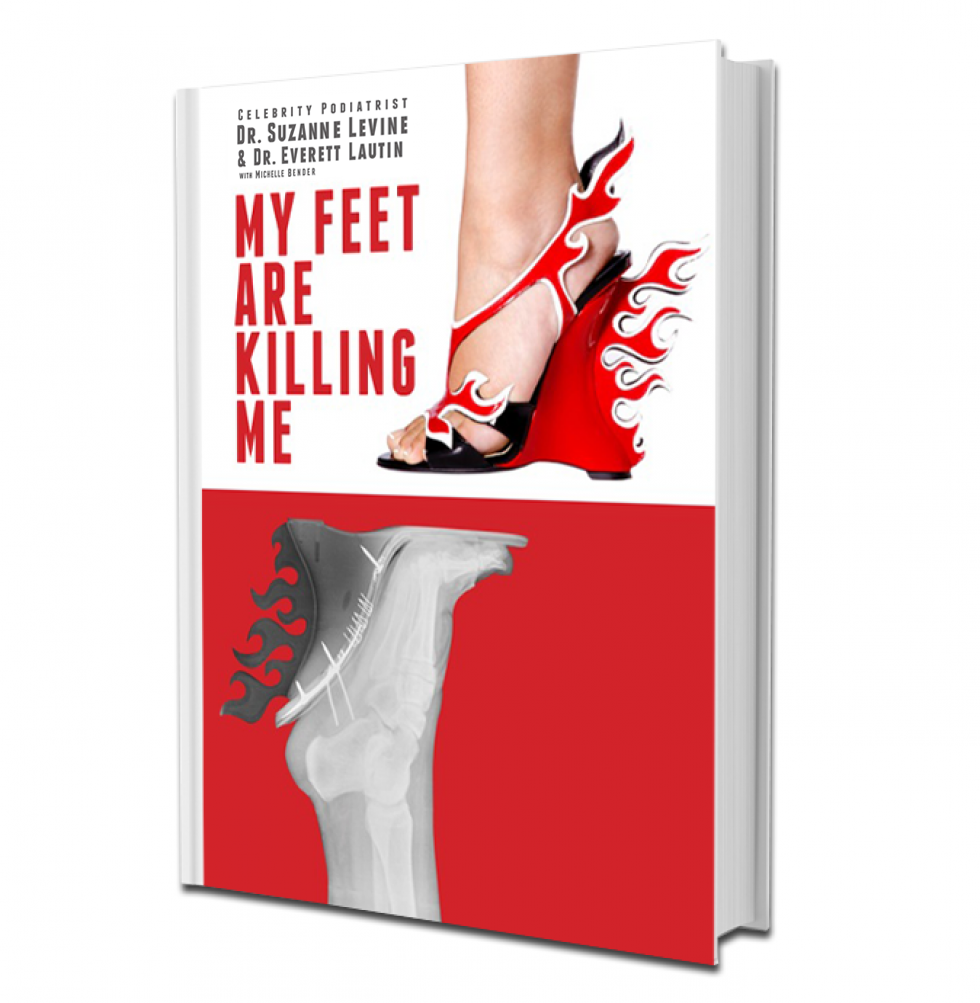 Still Looking For Something?